Walk into a conference room in this Brick City building and a voice-recognition video camera points your way. Next, your face flashes picture-in-picture on one of two 55-inch LED screens; the camera immediately moves to someone speaking on the other side of the conference table, while the other screen projects a working desktop. 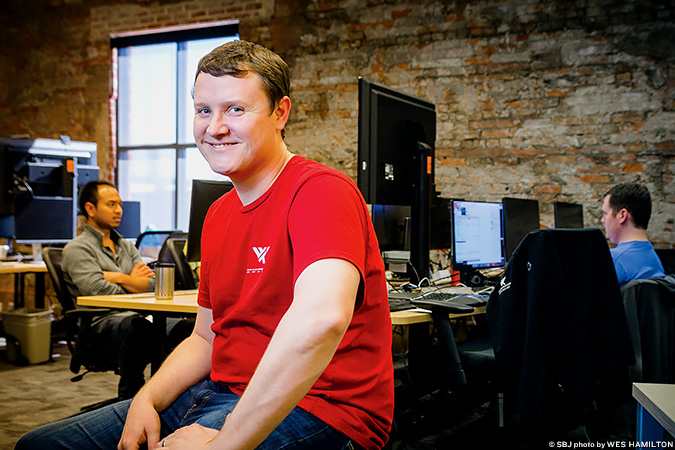 “The distance between here and St. Louis is small,” says Ben Pomerenke, the Springfield office lead for WWT Application Services, noting nearly all client meetings and conferring with corporate staff in St. Louis is via video conference. “We still get to see each other and those nonverbal cues.”

It’s the kind of workplace where jeans and T-shirt wearing professionals huddle around multiple, large computer screens in areas dubbed bullpens. WWT has five work teams between the 23 Springfield employees. They’re named for their own identity – such as Schwifty and Eris – not the multiple projects they work on as some tech environments go. Each team decides how to set up – and the tables on wheels sure help.

“We change a lot,” Pomerenke says.

Each team also decides on the workflow – a standard workweek or four 10-hour days – often based on the current project demands.

Oversized whiteboards serve as guides with diagrams and flow charts under the titles, “Current experiments” and “Team To-dos.”

Pomerenke, a software developer, has led WWT-Springfield since returning from St. Louis to open it.

“When we started it was me and a couple people,” he says. “I’m ensuring the culture here is in line with the culture in St. Louis.”

The culture stems from brothers Bob, Steve and Dave Elfanbaum and Nate McKie, who co-founded the company Asynchrony Labs as a dot-com startup in 1999.

By the time WWT acquired it in mid-2015, Asynchrony had shifted to project-based information technology consulting. But the founders remain involved, Pomerenke says.

“We work with companies that have a specific need, a specific solution to build. We bring that in-house and work with agile methodology,” he says.

With clients including the U.S. Department of Defense, Emerson Electric Co. (NYSE: EMR) and Mastercard Inc. (NYSE: MA), about half the jobs are in building robust web applications, mostly internal facing. Other project work is developing iOS and Android apps, both public facing and internal, as well as some native apps.

Last month, the software group was named an Apple mobility partner to essentially serve as a research and development house for business-centric applications on the iPhone and iPad.