Daniel Strabley, software engineer for WWT, is taking knowledge from his job to help his wife's grandfather, who is suffering from dementia.

Daniel Strabley, software engineer for WWT, is taking knowledge from his day job to help his wife's grandfather, who is suffering from dementia. Strabley has written software that can help people with varying degrees of cognitive issues, and is using Amazon's new IoT buttons to improve communication. 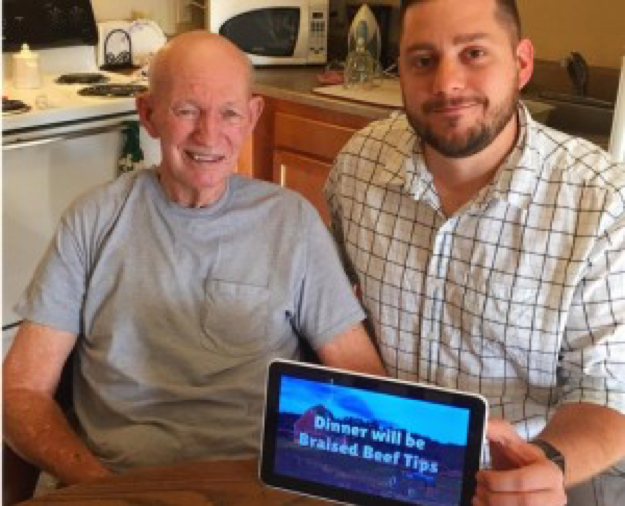 Strabley, a user engineer, works for WWT Asynchrony Labs; the company develops a range of software, including sensor integration, for corporate, government and military clients. It's important and meaningful work, said Strabley, although he can say the same about what he is now doing to help his family.

Using Android tablets, Strabley created a simple clock that also uses photos, such as those from his farm, to communicate time of day. Strabley kept adding to the system: pill reminders, doctor's appointments, lunch and dinner schedule, Cardinal start times and TV channel. The software can scale up to be more interactive for game playing and communication, or kept simple -- all depending on the capabilities of the user. It can be designed to show the names and faces of visitors.

Amazon's "Dash Buttons" are wireless buttons connected to a specific product, such as detergent, plastic bags or crackers. When you run out of a product, press the button and an order for more is processed. Strabley began hacking the Dash Buttons for his own needs, but Amazon -- perhaps realizing that others were hacking Dash Buttons as well -- recently announced a limited release of an IOT button that can be programmed using AWS services.

For Remiger's fellow residents, the main form of communications are white boards and notes, and they are often out of date from room-to-room, said Strabley.

Strabley and his wife, Jessica, are now working on scaling the system to work in an institution, and to develop a business around their efforts. The system is named Wally, after Mr. Remiger.