World Wide Technology’s Lewisville, TX team volunteered for the 23rd annual Trinity Trash Bash hosted by Keep Lewisville Beautiful (KLB) on Nov. 14. The team had 35 volunteers and helped KLB set a record for the number of volunteers who helped clean waterways in Lewisville. 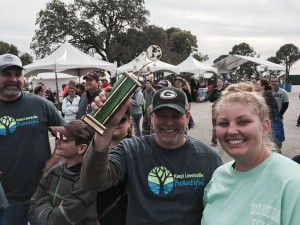 This year’s Trinity Trash Bash set records for the number of volunteers who helped clean waterways in Lewisville.

Keep Lewisville Beautiful (KLB), the city of Lewisville, LLELA Nature Preserve and Kayak Power hosted the 23rd annual Trinity Trash Bash waterway cleanup from 8 to 11 a.m. Nov. 14. The cleanup concentrated on areas along the lake shoreline, along the Trinity River and all the creeks, streams and canals that run through city parks. In addition kayak groups were used to clean further along waterways.

Volunteers gathered 440 bags of trash from local waterways, not including all the bulk, illegally dumped items. In total more than 4.5 tons of trash were collected.

“We had a lot of new groups this year including a bunch of groups from UNT that were fantastic,” Wells said. “Worldwide Technology was new this year, and they brought 36 volunteers. They were a really great group. As the program grows we’re excited that we’re reaching different people.”