In May, I was tapped to be the user experience (UX) software development lead for our engagement with NASCAR driver Bubba Wallace and Richard Petty Motorsports (RPM). My job, along with my application development partner Patrick Shannon, was to build a web-based dashboard that provides deeper insights into race data. A month later, Patrick and I were in pit row for the Toyota/Save Mart 350 in Sonoma, CA.

Pit row was one of the most ergonomically impressive environments I had ever been in. There are 12 crew members supporting Bubba. Some are responsible for getting the RPM No. 43 WWT Chevy back on the track as quickly as possible, others are focused on monitoring different components of the race.

Corners were always clear; tires were color-coded; everyone had his queue.

But for all the accuracy, organization and focus, one thing smacked of disorder: the presentation of data.

Crew members had to shift their attention between several monitors, laptops, notebooks and live broadcasts to get the information they needed, whether that was lap times, mileage or tire wear.

Like so many of the companies we work with, their biggest pain point was data distraction.

There are three main data feeds Bubba’s crew relies on for insights during a race:

The first step in making sense of this data is getting it all in one place. Using open APIs, we pulled down data from these sources into our app.

From there, we developed an application concept that gives each crew member visibility into only the data he cares about.

Putting the crew in the driver's seat

When developing the application concept, we based views off of different crew personas. One of the best examples is a dashboard for Richard Petty that we call the “King’s View.” As a race car driver and coach, Petty only cares about lap times. Using his dashboard, he can now drag and drop drivers to compare their lap times against Bubba’s without being distracted by other data points. 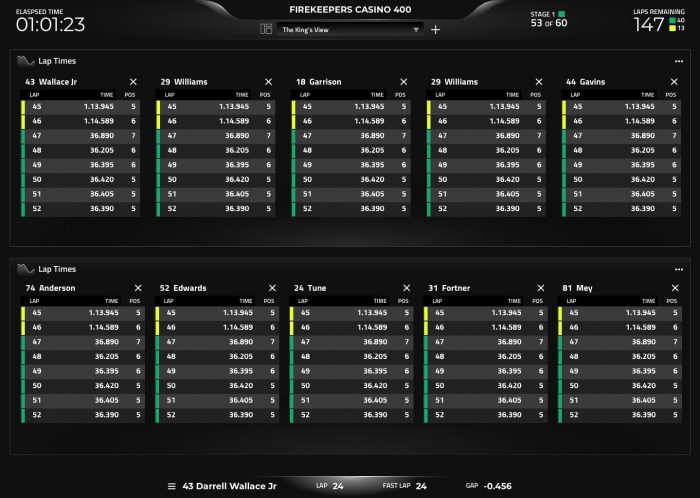 The new dashboard allows the RPM crew to compare racers in real time. Crew members can swap racers in and out with a single click.

Likewise, the crew member responsible for fuel can set up a dashboard that shows only mileage statistics. The crew member focused optimal course path can bring photos of cars in the race into his dashboard with one click. No matter the role of crew member, he can create a dashboard tailored to his job.

Crew chief Drew Blickensderfer felt the pain of keeping track of race data more than anyone else. At any given point in the race, Drew needs a big picture view of what’s going on. Before our app, he had to check in with multiple crew members to construct this view.

When this application is deployed, Drew will be able to look at a dashboard that presents a holistic view of the race. He’ll be able to keep his eyes on the track while analyzing data, which will save him precious decision-making seconds.

Fun as a frontrunner

Patrick and I understand that first and foremost software has to be functional, but a very close second to functionality is fun. It’s the fun component that creates power users who tout the software across an organization and provide invaluable feedback about its usability.

To work in this element of fun for our RPM app, Patrick and I created pictures of racers and their cars similar to the presentation of characters in a video game. Crew members can drag and drop drivers into their dashboards to get their race data.

In that driver view section of their dashboards, when they swipe or click up the app presents them a status panel that includes details like current position, the time of their last pit stop and images of their car taken during the race. Clean representative icons round out the app’s look. 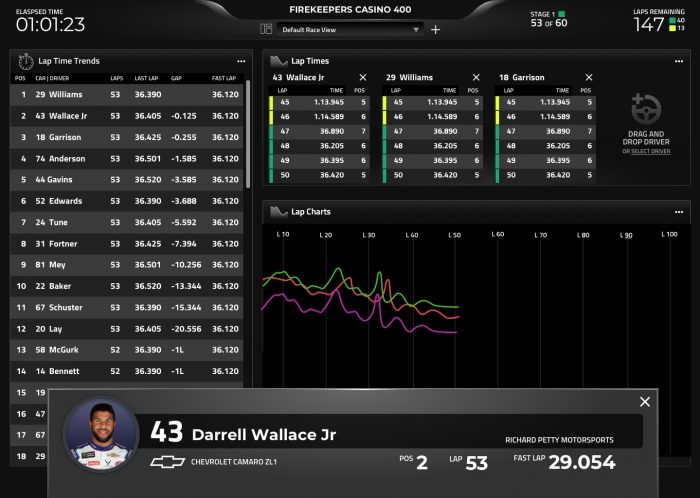 Status panels include a driver's current position, when the driver last pit stopped and other details crucial to decision-making during a race.

It’s important that fun and unique features are also functional. A great example of this is the night theme we created.

Not only does the night theme have a cool factor but it makes ergonomic sense.

The track during a night race is dim and lit from its corners. When crew members switch their sight from a bright monitor to the track, they experience a lag in vision as their eyes adjust. The night vision eliminates eye adjustment. This may seem minor, but a few blurry seconds can make a big difference when what you’re trying to see is moving at 200 miles per hour.

One lap at a time

Since meeting Bubba’s team in Sonoma, we’ve collaborated with different members of the crew almost daily. Patrick and I are honored to be part of the RPM team, and we’re proud that Bubba’s crew is a part of our team at WWT.

One of the most exciting aspects of our partnership with RPM is that we’re just getting started. We’ll use our agile methodology, continuous testing and weekly demos for RPM crew members to make the software even better.

Not every feature we roll out will hit the mark. The trick is to fail fast, rapidly retool and keep pushing ourselves. Because with every new tweak, we get one lap closer to success.