ACI is a powerful technology offering rich features for SDN to include application-centric security segmentation, automation and orchestration in the data center.

Application Centric Infrastructure (ACI) is Cisco’s software-defined networking (SDN) solution for data center and cloud networks. ACI is a powerful technology offering rich features for SDN to include application-centric security segmentation, automation and orchestration in the data center. Implementing application-centric design to specifically meet a segmentation strategy and a zone architecture requires a different approach and is referred to as the hybrid model. The hybrid model is necessary because of the unique challenges segmentation brings in terms of limitations with applications, how to address shared resources, performing discovery and overall security requirements.

ACI places endpoints into a logical endpoint group (EPG) and applies security enforcement for the entire group to ensure consistency. Many deployments of ACI rely upon the “network-centric” configuration model that maps legacy VLANs, EPGs and subnets in a 1-to-1-to-1 relationship. As a contrast, “application-centric” design of ACI deploys EPGs modeled on applications’ architectures, rather than subnets and network structures. This paper will provide insight on the design model, which will allow easier segmentation of applications while ensuring mobility of endpoints.

There is a significant increase in the demand for businesses to protect high-value data along with the associated critical systems. This is evident by newly defined compliance and regulatory language mandating protection of sensitive data and applying layers of security enforced through segmentation techniques. What was once considered an IT challenge is now at the center of business-driven requirements and necessitates an enterprise level of segmentation.

From an IT security viewpoint, the core of protecting sensitive data more than likely translates into enhanced controls to and/or around the applications. While those controls can vary widely, security at the network layer that transcends into application-centric architecture is usually the first layer of protection.

An advanced networking technology, ACI can provide the enhanced security and first line of protection, if properly implemented. The reality is, traditional networks are not designed based on application architecture, and adopting ACI application-centric model in large brown-field data center environments can present multiple challenges. Addressing these challenges requires a different ACI design approach, and the hybrid model is an alternative. This paper presents the hybrid migration model intended to address the core issues when migrating to application-centric design.

There are two main components involved in ACI when designing a hybrid model:

By separating these two components, your fabric becomes more flexible, which essentially enables you to build a fabric that not only can provide segmentation for application, but also maintains the same network operational model as in traditional networking. 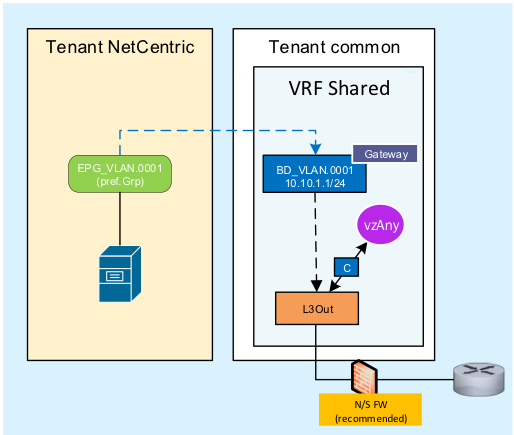 For brownfield ACI, network-centric design are first built with workloads and gateways migrated into ACI. The fabric will form layer 3 adjacency with an external firewall or router in order to exchange routes. In the above figure, note the following:

L2 extensions are not mentioned in the diagram. However, they should be built with bridge domain extension instead of EPG extension for the following reasons: 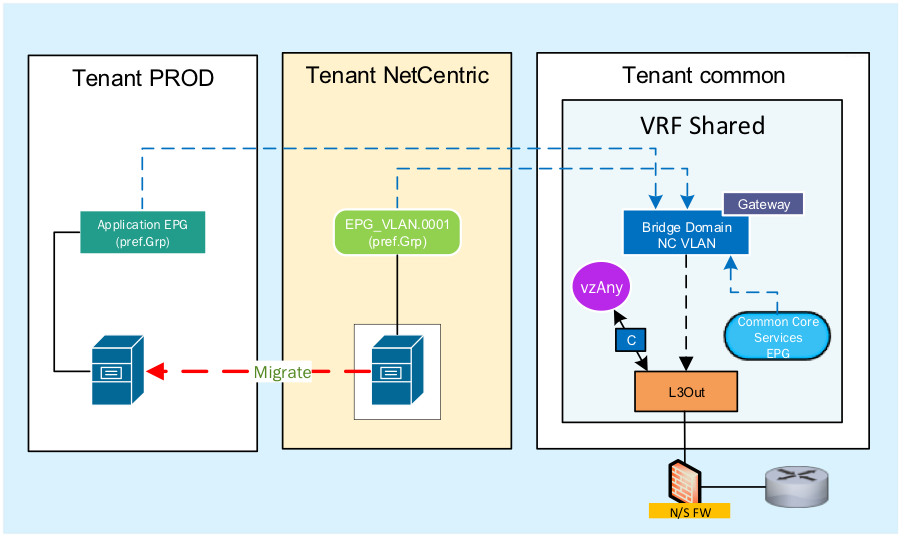 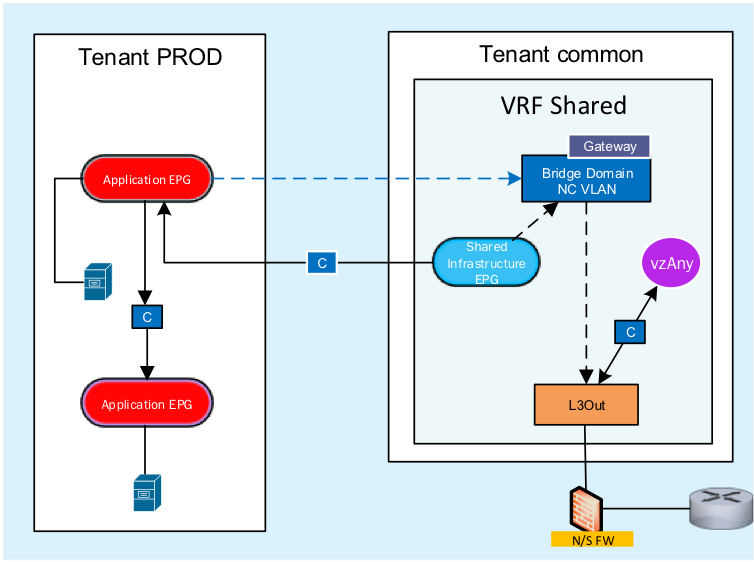 The above diagram illustrates a final state where only application-centric EPGs remain. The network structure is still the same as day one when the fabric was initially built. EPG to EPG communications are all controlled via ACI contracts where no “preferred group” EPGs exist anymore.

ADM is a critical process for any network segmentation effort, more importantly, ADM is deployed in data center operation to reduce response time to threats with real-time monitoring of events, as well as integrating ADM systems with automation and orchestration. There are generally two levels/processes for ADM efforts: application discovery and flow discovery.

The output of this process will help creating ACI ANPs and EPGs, as well as for building logical structures for within ADM software such as Illumio and Tetrations.

For “tenants,” it is recommended to be created based on business units and administrative management requirements of the tenants. Here are some examples of tenancy:

Flow discovery is the process to monitor and collect raw traffic flows on the wires via ADM software or via “ACI Telemetry (EX+).” The minimum flow data attributes needed are “source,” “destination,” “protocol” and “port.” The flow data will also need to be classified into application profiles built during application discovery phase. For example, the following flow maybe discovered:

Based on application discovery process, the following was created:

You can now map the flow discovered to the application discovered in the following format:

The application discovery data will then be mapped to EPGs and the flow data will be translated into filters in ACI or firewalls, for building ACLs.

It is important that the raw data be refined:

The hybrid model allows smooth transition to ACI application-centric and segmentation by addressing some of the major challenges. This includes greenfield deployment such as re-IP, shared services or lack of flow data.

The hybrid model also offers a path to separate systems running multiple services that require different security posture, which is often the case on systems that have always operated in a flat network with no internal firewalls. By using the hybrid model, you can stand up the same services on separate physical servers without affecting current applications.

For large segmentation efforts, it is best to breakdown a complex project into smaller and manageable phases, instead of performing large amount of work up front, which is challenging in a dynamic environment.

Do not let the complexity of ACI application centric stop you from taking full advantage of this SDN technology. After all, the investments made are for building a robust and dynamic network for the application and the business; let’s not stop at only network centric.