When the National Science Foundation awarded a top research university a $475,590 grant to develop a pan-campus research network, the school turned to WWT to learn how to best accomplish the objectives.

The new research network will provide access to and enable the transport, analysis and dissemination of big data within and beyond the university. This infrastructure will support the processing of big data through high-performance computing, enabling researchers to make strides in materials science, molecular and mesoscopic simulations, planetary and atmospheric sciences, genomics, cellular and organ level imaging, and the development of social and public health policies.

Because the network will support a plethora of applications, the IT team knew that there would be a heavy strain on network administration resources. In this environment, it’s easy to see the benefits of the centralized policy control provided by Cisco Application Centric Infrastructure (ACI). But the university needed to understand exactly how ACI would operate within a highly customized use case – in a “stretched fabric” scenario between two data centers.

WWT’s Advanced Technology Center was used to mimic the organization’s existing and contemplated network topology and develop lab test cases. This was a highly complex design, and in fact, we don’t believe any other VAR or even Cisco has constructed a stretched fabric instance of ACI.

During this eight-week engagement, we created a full active-active stretched fabric ACI within the Advanced Technology Center.

What technologies were part of the test?

The POC was highly customized, as our stretched fabric approach was the first of its kind. WWT had been working with Cisco for more than two years as ACI was developed, so we have developed considerable expertise. In fact, WWT produced the industry’s first white paper on the topic of stretched fabric.

Cisco’s ACI fabric consists of two components: a central controller called the Application Policy Infrastructure Controller (APIC) along with the Nexus 9000 series switches in a spine and leaf architecture. The APIC implements network and security policy while the switches handle the delivery of packets.

Because the POC required simulating a two data center design, WWT needed to acquire additional Nexus 9K switches and controllers within the lab. All told, more than $1.5M worth of equipment was in place for the test, not including corresponding data center infrastructure and specialized testing equipment such as Ixia traffic generator that was used to simulate network traffic. 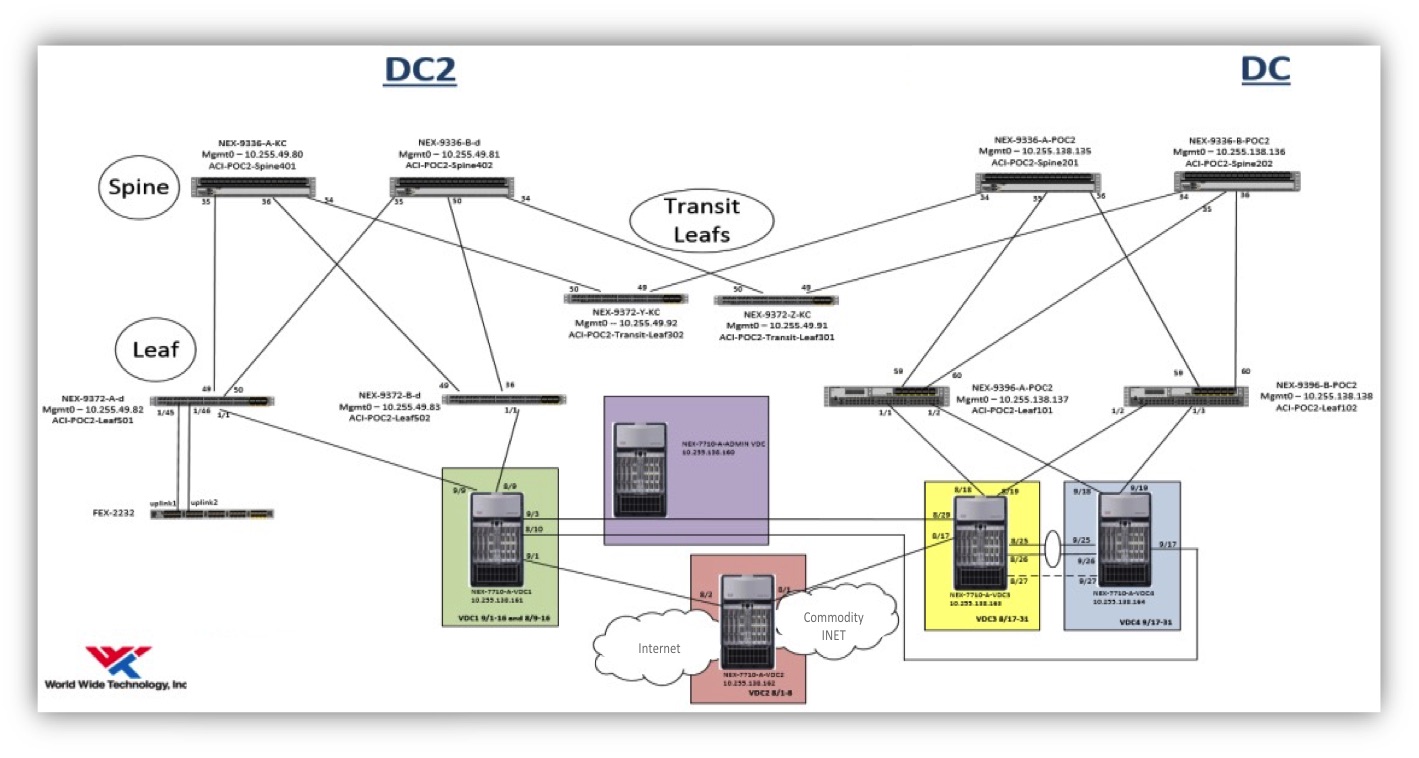 The process around the POC

The WWT team worked with the customer for approximately seven weeks prior to the proof of concept (POC) to determine the design, establish the test plan, order and install the gear and schedule the POC. The actual POC was performed over a one-week period, with the customer on site each day. In addition, Cisco systems engineer Jeff Humphries provided assistance before and during the POC. All told, WWT provided more than 300 man-hours of time preparing and executing the POC.

The initial discussions with the customer began with Account Manager Matt Ortbals and Consulting Systems Engineer Derek Legler. Regional consulting solutions architect Bob Watson and network consultant Dave Harrison were then brought in to help scope the project and help formulate the design and test plan. In addition, more than 20 ATC support staff resources played a role in securing, configuring, and implementing the proof of concept.

The university gained an understanding of the capabilities of ACI within a linked data center environment and how it would integrate with their current infrastructure. The POC provided proof that ACI would enable their two campus data centers to automate, virtualize, pool infrastructure and network resources and provision them based on application requirements and function within a pan-campus network with other research universities. The success of the POC is perhaps best summed up by the following customer quote:

Thank you both very much for the proof-of-concept opportunity. We are extremely pleased with the knowledge, expertise and guidance that WWT had to offer for the ACI solution. We look forward to future POC opportunities and are excited to implement the ACI solution in our environment. – Senior Network Systems Engineer

Read about ACI Design Workshop here to see how we can help you design an ACI solution that best meets your organization's business needs.